For certain surgeries there are some limitations on the precision and control in which a surgeon can operate. Robot-assisted surgery can enhance the capability for laparoscopic surgeons, and help provide the patient with the best surgical experience possible. 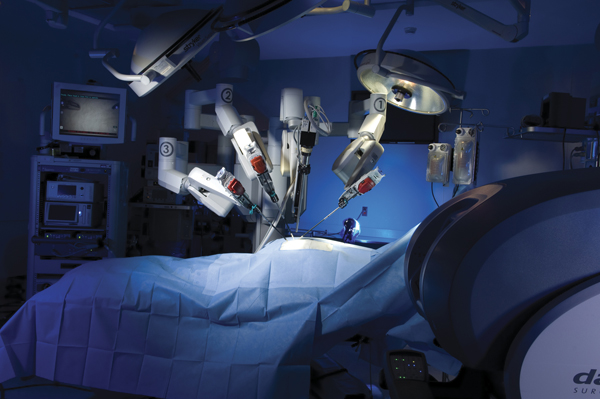 What is robotic-assisted surgery?

Robotics have allowed us to take an evolutionary leap forward in the field of surgical treatments. Robotic surgery is a minimally-invasive technique that is used as an alternative to open surgery. Similar to regular laparoscopic procedures, robotic surgery requires only small incisions to be made into the body, which are just large enough for the camera and specialized surgical tools to pass into.

The technology used in the process gives surgeons greater control, precision, and efficiency that can only be achieved using only human-performed surgical techniques.

During surgery, the surgeon is able to visualize the environment using a cutting-edge, high definition 3D-system that gives them deeper, more enhanced views when compared to conventional surgical cameras.

During the procedure itself, the surgeon places his hands into special devices that direct the robotic arms. With 360-degree articulation capabilities, these arms allow the computer to translate the surgeon’s hand movements into fluid, steady micro-movements that have unparalleled accuracy and control.

Robot-assisted surgery also make it possible for surgeons to perform delicate and complex procedures that simply may have been impossible or too risky to attempt with just the human hand.

Surgeons who use a robotic system in their surgeries regularly report on the enhanced precision, better flexibility and control that it offers. There are also many benefits for the patient.

One of the greatest benefits of robot-assisted surgery is the reduction in the risk of mid and post-surgical complications. The enhanced view makes it possible for surgeons to accurately assess risks, before performing the surgery. With a smaller area of delicate internal tissue exposed to the air in the operating theater, there is a reduced risk of the patient developing an infection or other medical complication.

There is far less blood loss during minimally-invasive surgical procedures, thanks to the smaller incision and greater precision used during the process.

Greater control and precision means that there is far less likely to be damage caused to the healthy tissue and nerves surrounding the area to be operated on.

The incisions made during robot-assisted surgery are substantially smaller than in conventional open surgery. This means that the wounds are much smaller and scarring will be minimal.

The immense precision and control in robotic techniques mean that surgeries are able to be performed with much greater efficiency, meaning less time on the operating table.

Patients who choose minimally invasive procedures, including robot-assisted surgery, report that they are in considerably less pain than those who have conventional surgery.

This also means less reliance on pain medications in the days after your operation. Recovery time is also much faster, and this is largely because patients have a better psychological response, as they do not have the fear of being in pain when they begin to go about their day to day activities.

Many different minimally-invasive surgeries now benefit from the addition of robotic technology. To find out more about the robot-assisted surgeries that we can offer, make an appointment with one of our friendly, knowledgeable team members today at 646-859-1400.